Transmutation by Fire – the burn of passion and adrenalin, stress and fierceness; I know this one. I would say that fiery insights and rebel spirit burnt my way out of and through the externally imposed rules and systems – it did me well through my teens and early twenties. So well that I sacrificed balanced hormones and fertility – my coritsol and testosterone levels pushed to the max and resulting in hair loss and beard growth.  In 2012 I met my love, and we both burnt our old lives  to the ground in a dramatic explosion of affair and travel and bloody minded determination. By 2014 I had left my whole culture and land, and was living temporarily in a desert city in central california. I was surprised to find the drying out of the december sun, I was in a burnt out depression as everything I had hung my ego was gone. I kept pushing myself, like spurts of a failing engine run out of fuel, and eventually found the turning point by realising I had to surrender all the self imposed strict rules and demands on myself and return to focusing on gentle, patient nourishment. After over 10 years, my hair started growing back (and having a beard to deal with has become inconsequential in the face of other life stuff I’ve dealt with.) I remain surprised that heat and desert bright sun was ‘depressing’..although also I found the USA culture to be dried out, gaudy and harsh.

“Calcination reveals a person’s true essence” – sounds rather lovely, but the challenging reality is to discover how underneath the displays, ego, narcissism, self importance, drama – that your true essence may be rather messed up  – after calcination you get the white chalky ashes of bone, charred remains, and a lot less than what you started with. There is a need for a new spirit to invigorate and revive what has been burnt.

Now I’m living on a rainy island in Canada, and appears perhaps by no coincidence that now I’m engaging with Transmutation by Water.

The Fire seemed great at burning out the stuff from external rules and identity etc, wheras Water is pulling into my feelings and emotions on an inner level, the shit that I feel about myself, and also the inner desires and emotional ‘karma’ that has accumulated over long periods. I’m thinking about how when cleaning crud of a pan it doesn’t help to burn it  – instead fill it with water and “leave it to soak”. I felt kind of FUN burning away external ideas, but looking at the inner clogs and emotional lumps inside me is rather harder. Everyone likes setting fire to stuff..who likes cleaning blocked toilets?

It involves, unsurprisingly, a lot of tears. I’ve discovered levels of tears  that I didn’t know – not just the frustrated tears, by tears of deep grief and sorrow. Tears of loss and mourning. Petty childish tears of broken dreams and tears of heartfelt disappointment. When they come out clean, they feel almost a kind of pleasure. I’ve finally come to accept that you need repeated washings in tears, repeated dunks in the water, for this process. This is important because it helps get past massive self judgement and critical inner voices  – mine likes to point out what a useless snivelly piece of crap human I am and that I better stop crying and “make myself useful” before people realise and abandon me completely.

Jumping in the ocean the first time is almost exhilarating. But once you know how cold and dark it is, convincing yourself to go back in again and again rather than stay on land or go fly away is rather difficult. Perhaps eventually you become a more watery creature that revels in it. Or maybe the water clears and a warms?

Being engaged in Dissolution is hard on people around you. My loved one demands why I am crying so much – is it to punish him? I try assuring him no. He asks desperately for the reason, perhaps so we can fix it – but bringing out words prematurely creates monstrous sea-creatures, explanations that are ugly and hurtful. I try saying “because I am feeling sad” but that’s not enough. Why? When we soften our chests and open our hearts to feeling, when we call for emotion to flood back into the dried out ashes, when we start to see the truth of what our live is, there WILL be grief, and sorrow – how can there not be? Look at the state of things! But we don’t.

I’m noticing (in myself, and perhaps around me)  – that accepting Fire to transmute – bright, shiny, heat..stress, burning fuel, smoke and light  – this almost seems condoned. We are encouraged to “burn out”. Our culture runs of the burning away of fuel and resource. We learn how to light our fires and glorify explosions of success, fire-work celebrity… but I don’t know many people who exemplify balance, restraint, and keeping their stress levels harmonious.

In myself – when I Want change – my first thought is to use Fire. But now I can’t find the sparks of stress or vision to fuel me. My being-soul-body stubbornly refuses to Ignite like that. “Find another way.”

The other way is Water. Fire – burns up, transcends. Water – sinks, pulled down by gravity. And I feel it. I feel it as I lie on bed trying to will myself to move – my flesh feels dripping of my bones, pulling down, dark and wet and heavy. There are more tears to cry. And, Finally, I’m permitting myself to cry now. Without needing to reason, pathologise or fix the tears. Just allowing them to come and letting them be deep and overwhelming as they need to be. I want vision and I want to start to flow again – fire and dryness will not give me that.

Last night I dreamt of Death of the King by Oceans. 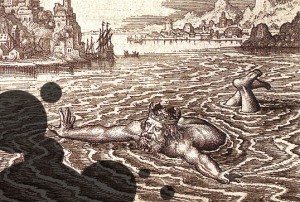 I was a girl-child, and there was a friendly King-man-father – everyone loved him and yet in my dream he was killed by the ocean waves. They were flooding into an open building a bit like a community simple church that was made of wood beams and steps gradually leading upwards a bit like an amphitheatre. We/I knew that the ocean was going to come in. But for some reason we all had to stay present to it. It wasn’t as huge and violent as the massive-wave dreams I get sometimes – but it was deadly ocean (tho some people played in the waves?). There was a whole community of people present, being ready for the immanent ocean. We thought the king-father was protected as we put him further back and behind a supporting post. But when the waves/tide came they pulled him violently INTO the wooden post and knocked him out! He ended up dead. I became older woman and I had to show the young girl the dead father-man – even as the water was moving around still, we were in the tide – I needed to show the girl he was dead and let her see his dead body. Despite this the women had covered his kindly head with material, because it had been smashed and his eyes especially mangled – too horrifying, but you could glimpse it if you looked up under the hood. The girl and the other women were placing beautiful but simple flowers (purple pansys) on his naked body/chest.

Yesterday I was given a piece of catalysis by a female friend – she reminded me that it is not external achievement that I care about so much as a state of being  – and feeling that I am being full and real. This gave me hope and permission to stop looking for “the replacement purpose-of-achievement that I can do instead of having a child”. But it also bought home just how FAR I am and how much I’ve LOST (perhaps to be regained) regarding what really fulfills me. It is letting the tears move, and I saw last night the layers of this piece of Prima Materia  : The Fiery Anger and rage that bursts out to others is one layer, but below that is both a layer of tears and deep sorrow, and also the old layer of anxiety and fear. These layers and beginning to become clear to me. I will stay in the vessel and keep writing.

I also am reflecting on my dream – a clear sign of dissolution and death of the king – dream material and writing is all I have right now. I wonder if it’s time to create an act of magic around dissolution. …