Alchemy – the art of transmutation, which means lasting change and transformation, of your self AND your relationship to the world and environment around you. From this place, you can effect material change in circumstance as well as spiritual/psychological change in yourself.

I’ve hit upon what may be a fun way to play with alchemy and transmutation (other than create animations and stories about it). Looking around the internet, so much of the info on alchemy is either based on the history of it as pre-chemistry, or incredibly high-brow hermetic babblings that have only small glimmers of practical use.

The best video I found was actually an explanation of Alchemy in a Japanese anime, Full Metal Alchemist –

The stages here are quite clearly expressed :

I really love the discussion of transmutation circles and transmutation arrays. My very first initiation into Real Life Magic involved learning about creating a circle, a container. It works. It focuses attention, and creates a time and a space within which the transformation can happen. It doesn’t have to be a visible line of chalk or a ring of incense. We can and do make invisible commitments of time and energy. Often we step into the one made (or emergent) of culture, of an employer-business, a school or study program. Done well, these systems have a flow of energy within them that holds and transforms, inspires art, work, growth, learning. Done poorly, there is stagnation, fragmentation, boredom, fracturing.

Hypothesis: Rather than focus on controlling or changing ourselves through linear WILL and action : instead “Set up” transmutation circles, in ourselves and our life – maybe around specific intentions. They allow for the flow of integrity and energy with ease and increasing potency – focus for attention and time. What we put within that – a creative project, a relationship, oursevles – will transmute. Change that lasts, is enduring.

Experiment : I will follow this thread, and start seeing/sketching the transmutation circles/arrays I’ve created in my life. I already see how I’ve made many, unconsciously, or stepped into ones made by others. Now I will get conscious about it, deliberate, and start encouraging and supporting others to create their own transmutation circles, with their life. Because we can do more Magic than we realise.( And it’s more fun than goal setting mindmaps… ) 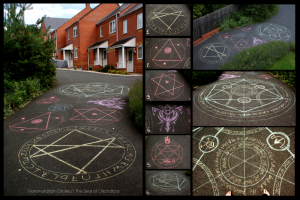